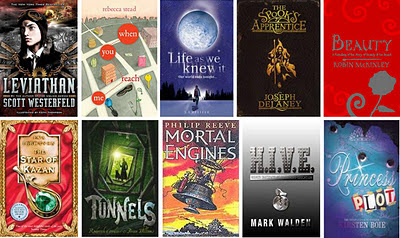 In an alternate 1914 Europe, Prince Alek is on the run from the Clanker Powers who are attempting to take over the world using machinery, he forms an uneasy alliance with Deryn who, disguised as a boy, is learning to fly genetically-engineered beasts.

When You Reach Me by Rebecca Stead (Time travel):

Miranda and Sal are best friends but when Sal gets punched by a new kid for no apparent reason, he shuts Miranda out of his life. Then she finds a mysterious note scrawled on a tiny slip of paper: I am coming to save your friend’s life, and my own. I ask two favours...

Life As We Knew It by Susan Beth Pfeffer (Science Fiction):

A story of a catastrophic natural disaster which catapults one into a terrifyingly real world - where life as we know it has gone for ever... Through journal entries sixteen-year-old Miranda describes her family’s struggle to survive.

Thomas Ward is the seventh son of a seventh son and has been apprenticed to the local spook. The job is hard, the spook is distant and many apprentices have failed before him. Somehow Thomas must learn how to exorcise ghosts, contain witches and bind boggarts.

H.I.V.E. series by Mark Walden (Thriller/Science Fiction):
Swept away to a hidden academy for training budding evil geniuses, Otto, a brilliant orphan, Wing, a sensitive warrior, Laura, a shy computer specialist, and Shelby, an infamous jewel thief, plot to beat the odds and escape the prison known as H.I.V.E.

Princess Plot by Kirsten Boie (Suspense):
When auditions take place for a movie about a princess, Jenna is amazed to be chosen over her more talented friends. Strangely, even Jenna’s strict mother gives permission for her to fly off to begin filming in the small, romantic kingdom of Scandia. But soon Jenna discovers things aren’t what they seem. She’s the spitting image of the real Princess of Scandia - who’s mysteriously gone missing... An extraordinary coincidence - or is Jenna caught up in some sort of dangerous plot?"

Will Burrows has little in common with his family except for a passion for digging which he shares with his father. When his father suddenly disappears down an unknown tunnel, Will decides to investigate with his friend Chester. Soon they find themselves deep underground, where they unearth a dark and terrifying secret.

A retelling of the story of Beauty and the Beast. Contrary to her name, Beauty is not the prettiest girl in her family. But she is the cleverest, bravest, and most honorable. When her father makes a promise with a beast who lives in an enchanted castle, Beauty fulfills her father’s pledge.

Set in the distant future, when cities move about and consume smaller towns. Tom lives in London and has a boring job at the Museum.  He unexpectedly gets a chance to fulfill his day-dream of being a hero, as he attempts to save a famous adventurer from a would-be assassin. But Tom is not at all prepared for what happens next...

After twelve-year-old Annika, a foundling living in late nineteenth-century Vienna, inherits a trunk of costume jewelry, a woman claiming to be her aristocratic mother arrives and takes her to live in a strangely decrepit mansion in Germany.
Posted by Mrs Keane at 9:30 AM No comments:

Read it! Loved it! Now Updated

Earlier in the year I made a post about the site Read it! Loved it!  Todays post is to let you know that Read it! Loved it! has been updated and it now includes recommended reads for boys aged 10 to 16+ as well as girls.  So if you're stuck for ideas of what to read next why not take a look - you might find just what you've been looking for.
Posted by Mrs Keane at 9:06 AM No comments: 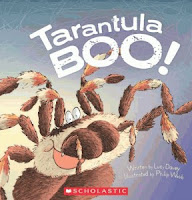 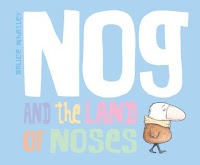 This might answer a few of your questions about exactly how Google Search works.

I found out about his video here.
Posted by Mrs Keane at 9:00 AM No comments: 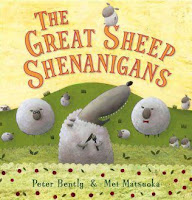 Posted by Mrs Keane at 8:34 AM No comments: Links to this post

Quizzicals - Meg, Zoe, Zack & Joseph and
Factoids - Laura, India, Miguel & Rory.
They competed against teams of Yr7-8 and Yr9-10 students from other local intermediate and secondary schools hoping to finish in the top three and win book vouchers of $50, $75 or $100 for the school. Both teams worked hard and urgent whispering could often be heard from them and the other teams during the question rounds. Questions covered a range of topics including geography, national flags, current events, advertising logos, books and general knowledge. You could get an idea of how the teams were going by the number of quiet cheers of success versus groans of disappointment there were as the answers to a round of questions were read out!  When the final placings were announced we learned the Factoids had placed 5th while the Quizzicals had finished in 2nd place just 2 points behind the winning team from Upper Valley Middle School.  Well done teams!

Teachers, librarians and parents who attended with the teams were also able to take part in the quiz and our team - which included Mrs Thompson & myself from St Brendan's as well as others from Heretaunga College, Fergusson Intermediate and Upper Valley Middle School - finished ahead of the team of librarians from Upper Hutt Library!
Posted by Mrs Keane at 8:30 PM 2 comments:

Email ThisBlogThis!Share to TwitterShare to FacebookShare to Pinterest
Labels: Competitions 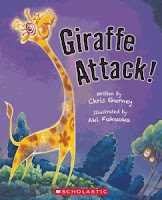 
Andy Griffiths wrote his first published story when he was in year eight at school. Called ‘Lost in Time’, the story appeared in Pursuit magazine. Despite this early success, he was more interested in rock music and spent most of his creative talents in high school writing rock songs. After high school he earned a degree in education and then became an English high school teacher, he has also worked as an editor and publisher of educational books.

Andy Griffiths is one of Australia’s most popular children’s writers. He is the author of over 20 books, including nonsense verse, short stories, comic novels and plays. Andy is best known as the author of the much-loved Just! series and The Day My Bum Went Psycho. He has had a long-standing collaboration with Terry Denton, who illustrated the Just! series and The Bad Book, and its follow-up.

Currently we have 5 books from the Just! series by Andy Griffiths in the Fiction section of our library.

The above information about Andy Griffiths was adapted from his website, where you can also find out more about him and his books.
Posted by Mrs Keane at 6:57 PM No comments:

World Clock
If you hover the cursor over the time for a city it shows what the date is.